Unusual things to find on top of a hill #147

Not trig points or cairns or walruses. More like the stuff you get on top of Snowdon, or Green Lowther or Broad Law.

So, todays little competition. Can you name this hill ?

Ok. Here's another clue. About half way up, the Ranger Service has set up a viewpoint with indicator

Now some of you know this, but keep quiet and don't spoil it for the others.
Getting near the summit now - deep inside the "death zone"


OK. You're chappin. Here it is 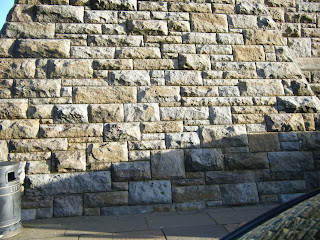 Or perhaps this makes it easier 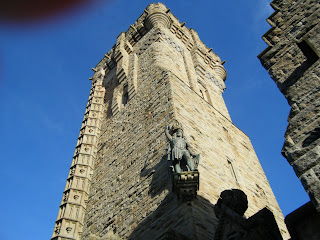 Or perhaps this view is more familiar 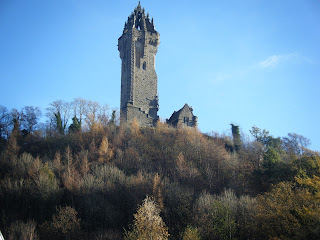 ﻿
Yup. It's The National Wallace Monument atop the lofty Abbey Craig, one of the line of basaltic intrusions which stretches across the Carse of Stirling. The Craig itself is about 360 ft high and the monument adds another 220 feet. I considered going in, but first phoned TLOTH to check if our lottery numbers had come up. She answered in the negative so I gave it a bodyswerve. £7.50 - that will be shining.

The monument, of course is in memory of William Wallace who led a tiny force of blue-painted Scots to victory over a massive army of the perfidious, arrogant, malodorous English at the battle of Sirling Bridge.They, however, being notoriously bad losers, put him to death in a manner which cannot be described on a family blog.

Weather : Lovely winter afternoon
Distance ; Some kilometres (Some multiplied by five eighths miles).
Height gained ; Nil. (I  was 5'11 when started, and the same when I got back)
Toe status: Still there.
Posted by Oldmortality at 17:44