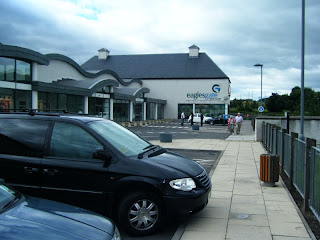 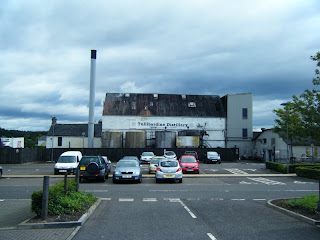 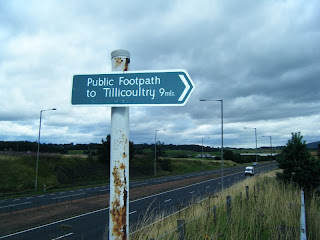 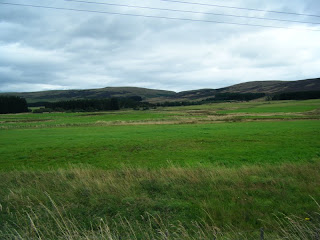 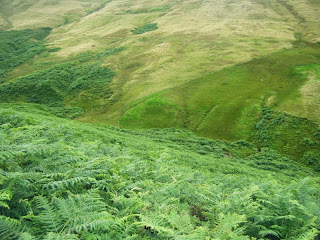 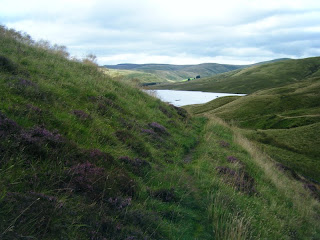 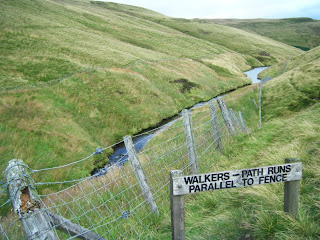 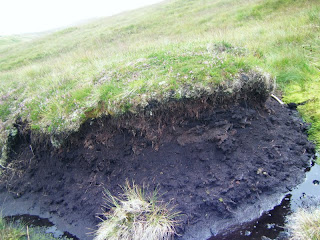 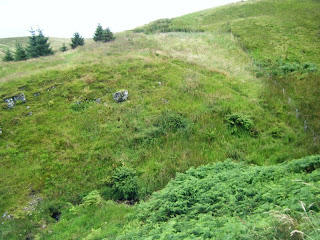 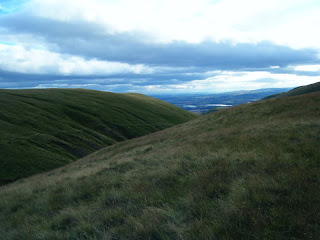 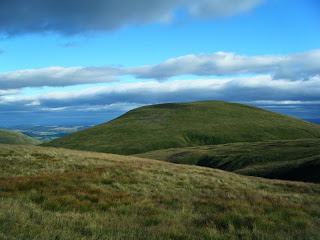 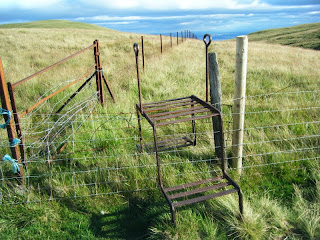 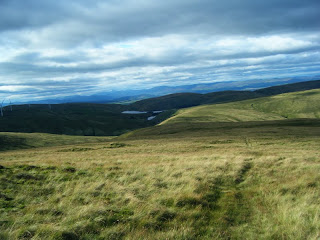 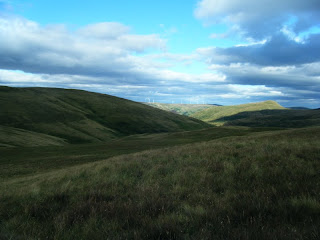 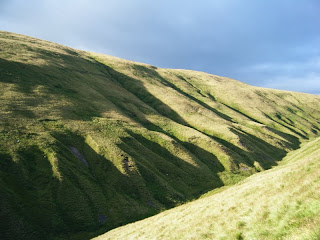 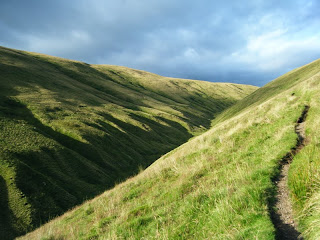 I have now read the guidebook description. ( "Why didn't you do that befo.." just shut the feck up, eh.)
It confirms
1 Paths marked  on the OS map for this route either do not exist or exist in a different place.
2.The way I eventually adopted in the mid section ( ie climb up onto the ridge and stop looking for a contouring path) was "correct"
3 This is a grade 4 (highest) difficulty walk . For this area, of course.
The Naismith is given as 3hr 50min, so I wasn't that far out, was I ?
I have not yet decided whether to retrieve my rucksack from the wheelie-bin.
Posted by Oldmortality at 15:34 8 comments:

The Allanwater Way (Part the First)

Today I set off to do one of my regular rehab walks.

It goes from Kinbuck, following the Allan Water to Dunblane, and the Darn Walk to Bridge of Allan.  Then along the Allan to it's junction with the Forth, and hence to Stirling. About 10 miles, mainly downhill - that's what rivers do.
If you fancy doing this, then I suggest you park in Stirling and get the wee diddy C48 bus to Kinbuck. If you live in Kinbuck, ignore that last bit. 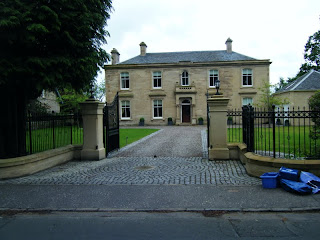 It was an overcast and misty day when I left the house.

The Allan rises somewhere above Blackford, but the upper reaches are serpentine, partly canalised, and not nice walking. 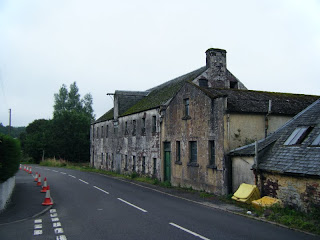 Kinbuck was an estate and mill village. This old carding mill was the first of more than a dozen mills of various kinds on this stretch of the Allan Water 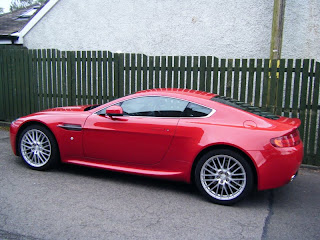 Since the mill closed, local people have to eke out a living doing casual farm work and selling Big Issue

About this point I thought I heard the sound of kegs being rolled around in the pub carpark. Then I remembered that there is no pub in Kinbuck. Then big, and I mean big, drops of rain began to fall. So that was the theme for the next few hours - thunder
A path goes down to the river bank from just before the railway bridge and continues through a flower-rich meadow to Ashfield. It was tipping down.

Ashfield is an interesting wee place. No, really. 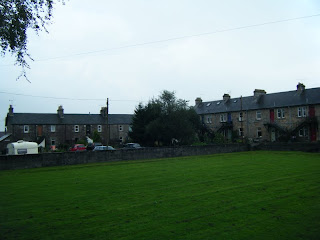 It was built as a model village for employees of the Airfix company.(Actually, J and J Pullar, Bleachers and Dyers, of Keirfield, Bridge of Allan.) Laid out around a square, it displayed most of the good and bad features of Victorian paternalism. 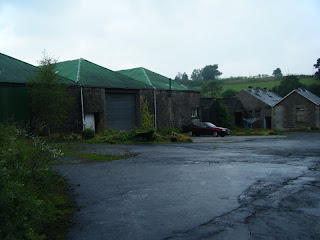 The mill apparently did a nice line in striped linings for gents waistcoats. The Pullars sold up after WWII, and British Silk Dyers kept the place going as a significant local employer until the 1960s.These days, various small businesses use some of the buildings. The old mill lade has been utilised to power a small run-of-the river electricity generator 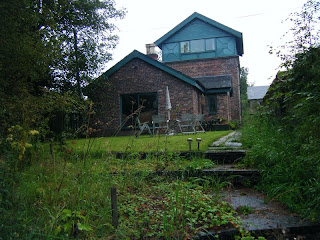 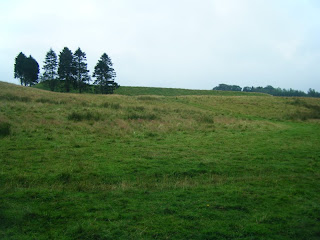 This is a Roman fort. It is. Honest. OK, I'll go up for a closer look. 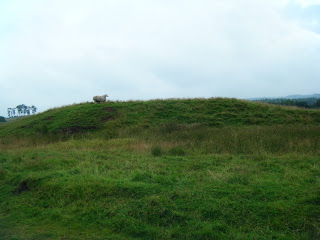 There ! Told you. That mound was probably the cantinium or something. I got the sheep to pose there for some perspective - visual and historical. Just imagine the sheep wearing sandals, a little leather skirt and a helmet.
Hmmn - I seemed to have fired the imagination of the Welsh and Aberdonian readers there. 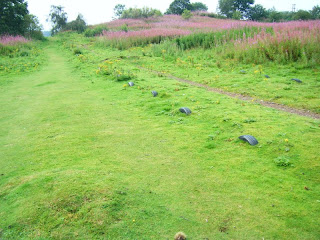 Burial site of a neolithic relative of the Loch Ness monster. 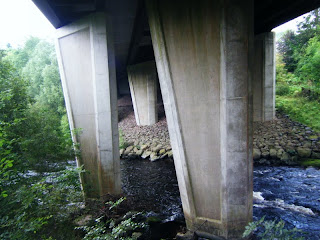 If you were driving on the A9 north of Dunblane at about 12.30, I was having a pee underneath you. 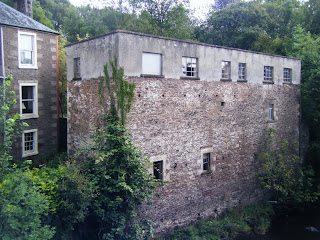 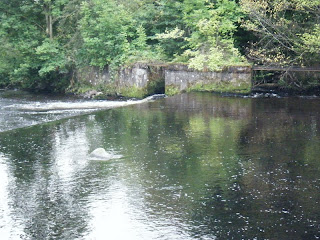 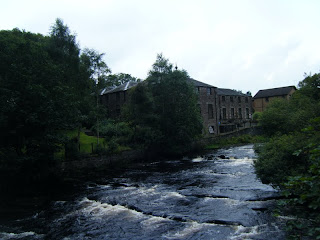 I took shelter and stock under the railway bridge at the Laigh Hills park . I was drookit. I had selected my old red Wynster rainjacket - I  just felt sort of "Scarlet" , you know, this morning. Despite recent spray re-proofing, this proved to have all the functionality of a chocolate fireguard. Good to find this out so close to home. I took off my shoes and wrung out my socks. A lot of dead skin and scar tissue had dissolved and was now lying on the path. I will have to rethink my footwear strategy.

There was no need to persevere - it was only a walk. I squelched into Dunblane and got a bus home. 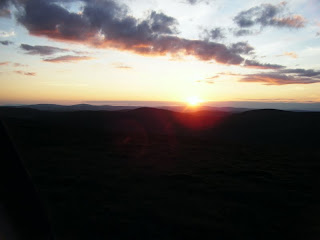 Regular readers of the blog ( I know - it has a kind of "car crash" fascination, doesn't it ?) are aware of it's stop / go nature. Two steps forward and one back. Or vice versa. As the case may be.


Things had been going quite well during the early summer, and the overnight camping in the Lowthers was an unexpected bonus. I had hoped to build on this. It opens up so many options to me, being restricted to public transport and walking at such a slow pace. Longish day walks could be done over, say, two half days with an overnight camp.
Plans were laid.


Well, you know what life's like. One minute you're pechin at the top of a ladder, and the next you're back down at some snake's erse. I won't bore you with the details - you don't read this for tales of blood and snotters, do you? Suffice it to say  that we are currently in an ongoing backstep situation.
As you can imagine,  I have reacted to this setback with my usual good natured stoicism. (Aye,right. Mrs.OM).

Mention was made elsewhere of " brown sauce"


Now it is a well known fact that Scotland is divided on an East - West basis on condimentary lines.
Buy chips in Glasgow, and you will be asked if you wish "salt 'n vinegar ?" Purchase the same delicacy in the Capital, and the enquiry will be " salt'n sauce ?". Fine. But where does the isocondimentary line fall ?. I know for a fact that despite our central geographical location, we in Stirling hang with the weegies on this one. As do the bairns of Falkirk. So where do you draw the line ? Polmont ? Linlithgow ?
I think we should be told.


Heres a definite weegie. Our schoolkid group supported him a couple of times before his band was "Sensational" and was merely "Big Soul". Nice guy - total radge.

It's the Bridge of Allan Games today.

It is now officially permissible, if not compulsory, to greet people with "Aye, the nights are fairly drawin' in"

The schools are back next week.

It's been steadily peeing down for 24 hours.

Still, look  on the bright side, eh ?

Posted by Oldmortality at 16:38 No comments:

Its that time again !

Higher results are out. By email and text now, I believe. Wonder how the experience compares with hearing the rattle of the letter box and the thud of the large brown envelope !
Tough for the kids, but my sympathy at this time goes out to the parents, who may be trying to support three or more children with "mixed" results.


And this just in...
"Paul Daniels taken to hospital after being injured by a pizza thrown by the puppet Sooty."