I was awakened as usual at 04.30 by the slamming of a car door as The Lady of The House left for her job at the quarry (these rocks don't break themselves, you know). After anothe couple of hours of warm snuggling, I went downstairs to find my spurs on the table.
Now, I didn't actually find spurs on the table. I don't own any spurs, having found them to be rather counterproductive on a bicycle. No, I was using a figure of speech. Like what they used to teach you at school 'n that. I was of course referring to the The Borders legend that when a Reiver saw that The Lady of The Keep had placed his spurs on the table it meant that they were all out of beef, and that it was time to get on his horse and reive some more cattle from the Geordies.Except of course for the Kerrs of Jedburgh who, as well as being congenitally left-handed, were also vegetarian. Many a pack-horse laden with quorn and humus looted from the College and Coquet Valleys did they lead over the Carter Bar !
Nowadays, of course, Mrs. Rutherford/Scott/Armstrong/Laidlaw just texts her husband to pick up two pizzas and a couple of Mars Bars on his way home from the call-centre. And then switches on the deep fat fryer.


I digress
In fact it was through the medium of a post-it note that I was instructed to "Buy porridge". My first reaction was that it was a hot tip to invest in cereal futures, but more mature consideration showed that a journey to Mr. Cohen's food bazaar was required.
Now, I know what some of you are saying . "Why didn't he go to the Coop, its closer ?"  Well, it's a bit delicate. One of the ladies who works at the Coop was in my class at primary school, and I know that she knows that I remember that she used to pee her pants. So, best avoided, I think.


So off we go then over the White Bridge, past the factory and up the station brae.
What ? Yes, I know it's blue. But it's still the White Bridge. Alwways has been. Just because the council painted it blue, doesnt make it not The White Bridge. OK ? May I continue ? Good.


This des res used to be the station. Where I used to marvel at Sir Nigel Gresley's masterpieces thundering northward. Now there is a new "station" - a few platforms with a couple of bus shelters. But it's not a real station with porters and barrows and Celia Johnson and stuff.


Withe the heavy rain last week, and the frost coming out of the ground, there was a lot of this


One of my favourite spots on the planet. I could sit here for ever. In fact, I'm told that I sat here for nearly two days in 1966. But then hallucinogenic drugs were legal in those days. I think.


The crux of the route ! 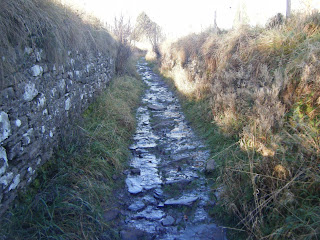 This bit is Roman. You can see how it is cunningly laid out so that a chariot with blades on the wheels could run up and down and trim the grass verges.


And not a golfer to be seen. Dammit. I'd brought the crossbow,  too.