Purely as a matter of record, I climbed Dundreich and JC ( Two Donald Tops) from Eddleston today. For some reason the camera does not seem to have saved any pictures after the first four. I'm quite angry about that. As soon as I have finished here, I will be out to the garage with a mashie hammer and brick bolster in an attempt to fix it .

The day started well as the bus hurried me to Edinburgh under a promising mackerel sky. As I crossed The Bridges in the 62 bound for the Borders I got a viiew of sunshine down in East Lothian, and imagined Mick and Gayle making good progress in past Aberlady and Longniddry.
I got off the bus in Eddleston and got lost. I'm fine on the hill, honest, but these streets and caravan parks seem to throw me. Early doors, I was confronted by the first barbed wire fence of the day - fortunately it was pig netting under the barb, making climbing easier.
The weather was, typically, fine early on, hazy and cloudy round the tops, with the sun coming out on the way down. It looked a bit cloudy to the  south, where Knipe's Nomads should have been strolling down Glen Sax ( or similar ).
Ascent was straightforward (he said smugly). Anyone noticed that the small steps are gradually getting bigger ? There's bound to be a big setback soon !
Dundreich summit - trig pillar and a wee cairn with an unusual rugby ball type stone on top. We are in the Borders, after all
I had climbed these hills with the laddie, but from Gladhouse, and can't say in all honesty that I really remember much from then.
Return by the same route but refined to minimise fence crossing. Back up to Edinburgh on the 15.14 62, leaving an hours wait at Edinburgh bus station for the Stirling bus. And just around the corner from the Cafe Royal. I nearly convinced myself to pop round for an orange juice, but there was the off chance I might meet someone. It's no easy when you're wee ! 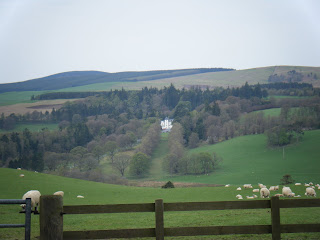 The Black Barony across the valley. Yes,yes, I know. But we live in politically correct times 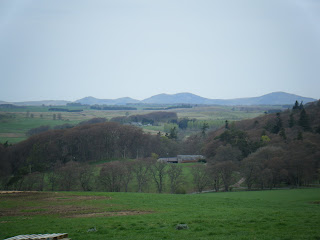 The main Pentland ridge. Very tempting, Flotterston to West Kip used to be a Sunday fave. 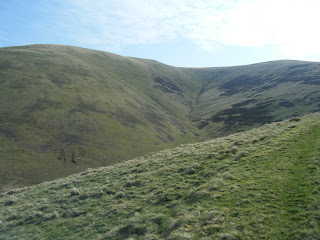 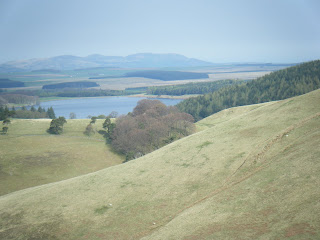 Portmore Loch.
﻿And it would appear that the embed function has disappeared from Youtube
edit. found it - you have to click share now.
Posted by Oldmortality at 19:43